Santa Claus and Holly Elf stood at the edge of a clearing. They had been cross-country skiing through the forests, searching for an Abominable Showman--better known as a Yeti. They had been tracking him since Yeti footprints were found inside the stables at the North Pole, right at the place where two of the reindeer--Ajax, and his pregnant mate, Scooby--were last seen.

Now, here he was, dancing in around, wearing what looked to be the hat of Dolores Flemspackle, the granddaughter of Ha'penny Elf, who had come to buy the Appendapulator, the great toymaking machine of The North Pole!

The great gray creature was dancing around in a circle flailing his arms around and making a big ruckus. All the time, he was singing a song:

"Christmas is coming, the goose is getting fat!
My Christmas gift this year is Dolores Flemspackle's hat!
I gave her Ajax reindeer, and Scooby reindeer too!
What she wanted with those reindeer, I haven't got any idea!"

Santa nodded grimly. "It's just as I suspected!" he said.

"You mean you think that the Yeti stole the two reindeer to give to Dolores Flemspackle because he had a crush on her?" asked Holly.

"No," said Santa. "I've known that all along. What I've suspected was that Yetis are really bad songwriters!"

At the sound of his voice, the big furry creature stopped dancing and looked at Santa and Holly. With strong, purposeful steps, the abominable creature headed towards them. 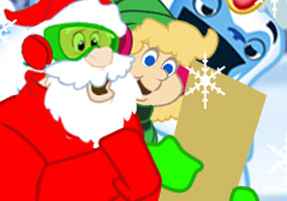 But it was too late! The monster was already on top of them! The Yeti reached out one gigantic paw and...

"Mails for you, Santa!" he said cheerily. In the palm of his hand was a letter, in Dolores Flemspackle's handwriting.

Santa took the letter and read it. "Ho ho!" he said softly. "Holly, I think we may need the help of the Santa Spotters again this year."

What's going on? What did Dolores write to him? And who are the Santa Spotters? Keep reading the North Pole Times to find out! 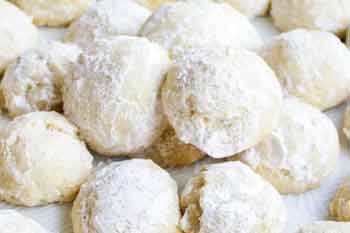 Snowball Cookies
Here's another favorite of the Elves. We think you will enjoy them too.