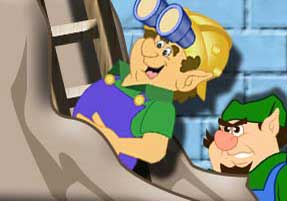 After a difficult beginning to the Christmas season, things seem to be settling down at the North Pole. True, Santa and Waldo Elf were still stuck in orbit, but Gizmo Elf's rescue rocket is almost finished, and the Santa Spotters have done such a good job that NORAD has been able to track his progress!

The elves, who had been on strike because of Mrs. Claus' decision to give them healthy snacks like vegetables and fruit, went back to work when Mrs. Claus promised to give them cookies and cakes after they ate their veggies!

"It looks like we're going to have a good Christmas after all!" said Toby Elf, the Chief Toy-making Elf, to Mrs. Claus. "Let's hope so," said Mrs. Claus. "We still need to get Santa back down from orbit!"

"Well, the Appendapulator has done a great job of making the rocket we'll use to go and get him," said Gizmo Elf. "This time I made sure I installed the 'down' button on the rocket, so it won't get stuck up in orbit like the one Santa and Waldo are on now!" 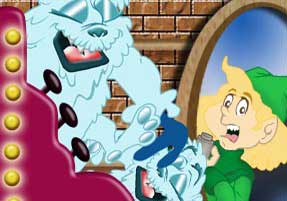 Holly Elf, the Chief Santa Spotter Elf, came in, with a big pile of papers. "The Santa Spotters came through just great this year!" she said. "I just got an email from NORAD. They've been able to track Santa's flight path, and he'll be flying right over the North Pole in three-and-a-half days! We can send the rescue rocket up to get him, and be back down in time for dinner!"

"And the elves have caught up in their toy-making!" said Toby Elf. "They've even repaired some of the damage that those Abominable Snowmen did when they tried to make toys!"

"Oh, yes, the Yeti!" Mrs. Claus chuckled. "Having them come in and make toys was not the best idea I've ever had. By the way, where are they now?"

"I saw them earlier, heading for Gizmo's workshop," said Holly. "I wonder what they're doing there?" As if to answer, there was a loud banging sound. Another elf rushed in. "The Yeti are in Gizmo's workshop!" he yelled, "and they're taking apart the rocket!" 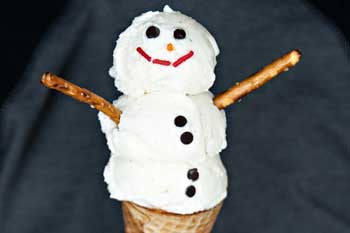 Ice Cream Snowman Surprise
Here's a fun treat that all the Elves like to make for dessert.