Snowman Blows In With News For Santa

With a swirl of snow and a gust of wind, a Yeti--sometimes known as an Abominable Snowman--blew into town. The huge creature plodded through the main square, scowling under icy brows at the elves who stood and watched him.

The mammoth Yeti seemed to drop the temperature of the North Pole even colder as he made his way to the toy factory, where Santa was overseeing the days' activities. When Santa saw the creature approaching, he buckled his belt a little tighter, and walked out to meet him. 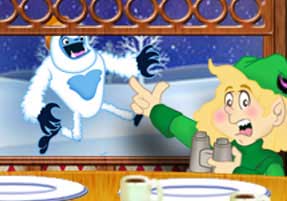 The two met face-to-face---well, considering the size difference, it was more like face-to-belly, and Santa stared up at the looming creature. "Well? Where is it?" Santa demanded.

The Yeti reached out a massive paw and picked up Santa like he was a little doll--and gave him a massive hug!

"Ohhh! Ho! Ho! Ho! Not so tight!" Santa shouted with a laugh, hugging the creature back. "What brings you all the way up here?"

"I gotcha a letter here, Santa," rumbled the great beast, pulling an envelope from some hidden spot in his fur.. "A lady down south handed it to me to give to you personally."

"It's not a Christmas List, is it?" Santa asked. "You know, we have an easier way of getting those lists from kids."

"Isn't that what I said?" asked the Yeti.

The Yeti did both things. Santa read the letter. "Hmmm. Seems we may be having a visitor or two in the next few days." Santa looked at the elves crowding around him. "Do any of you remember Ha'penny Elf?"

"Of course we do!" said Timbo Elf. "Ha'penny was one of the nicest elves around."

"Didn't he fall in love with a human girl, and leave the North Pole?" asked Gizmo Elf.

"Indeed he did, and they had a family," said Santa. "And now, his granddaughter, and her son, are on their way here!" 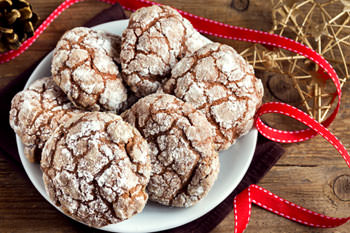 Santa's Crinkles
Yet another tasty treat from Ali Elf. Be careful though, you'll probably want to eat a lot of these.