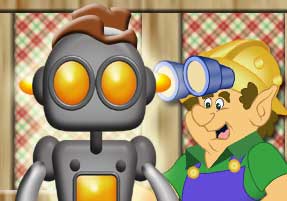 Gizmo Elf burst through the door of The North Pole Times, pulling a handcart behind him. On the cart was something covered in a blanket.

"I didn't know we had problems," said Jiller Elf, who was working on her 'Elf of the Season' story.

"Oh, we have lots of problems," said Elvin Elf, the Editor in Chief, "I just don't remember asking Gizmo to solve any of them!"

"Well, that's the great thing about me--I'll solve your problems before you ask me to!" said Gizmo proudly. "And this--" he gestured to his latest creation--"will help you tremendously!" And with a flourish, he pulled the blanket off, to reveal..

"It looks like a statue," said Jiller. "Of an elf. Is this supposed to look like the winner of the 'Elf of the Season' award? Because we haven't decided who will win it--and it doesn't look like any of us."

"Well, maybe a little bit like Ali Elf," said Elvin. "How is a statue of Ali Elf going to solve our problems?"

"It's not a statue--it's the Robo-Reporter!" said Gizmo. The Robo-Reporter looked around at the room. It made a noise. It almost sounded like someone going "hmmmm...."

"What's one of your biggest problems when reporting?" asked Gizmo. 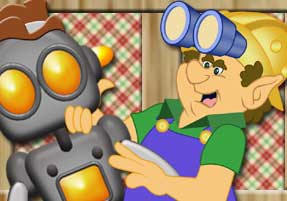 "Remembering what happened!" said Gizmo, answering his own question. "The Robo-Reporter remembers everything! That solves a problem!"

"We've solved that problem, too," said Elvin, and he held up a little device. "We call it a tape recorder."

"Yes, but the Robo-Reporter not only remembers, but it can take what it's heard, and write a story about it!"

"Really?" asked Elvin. "I find that hard to believe."

"Well, let me show you," said Gizmo. "It's been on since I cane in here, so let's ask it to report on what's happened so far."

The Robo-Reporter went "Hmmm" again, then a keboard appeared in its chest, and it started typing. It spoke the words it typed. "Gizmo Elf, Santa's Chief Inventing Elf, has created a new invention. The Robo-Reporter may just be his finest invention ever." it said.

The Robo-Reporter continued typing and speaking. "Unfortunately, Gizmo does not know as much about people as he does inventing."

"Although well-meaning, he has tried to solve a problem that did not exist," said the Robo-Reporter. "The North Pole Times is a well-run newspaper, with a staff of dedicated reporters, and does not need a Robo-Reporter. When asked for a comment, the Robo-Reporter said, 'It's a shame, because it would have been nice to work there. But I understand that Easter Town doesn't have a newspaper, so I'm going to go there and ask the Bunny for a job.' When asked when he intended to do this, the Robo-Reporter replied 'immediately.' Calls to the Easter Bunny for comment were not returned."

And with that, the keyboard retracted into the Robo-Reporter's chest. The Robo-Reporter climbed out of the handcart, looked around the room, said "hmmm" one last time, and walked out the door.

"I don't understand," said Gizmo, "I thought it would help you."

Elvin chuckled, and put his arm around his friend's shoulder."In a way, it did," he said. "This will be the top story in today's paper!"

Lots of things are still going on at the North Pole as we get closer to Christmas! Keep reading The North Pole Times to keep up! 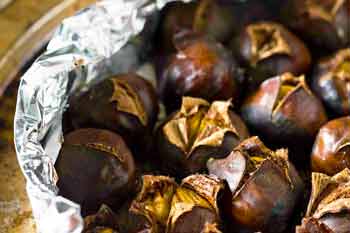 Spice Butter Roasted Chestnuts
These roasted chestnuts will make Jack Frost nip at his own nose.