The problem was, there was someone in the room who didn't really care about all this.

Actually, almost no one in the room cared about this.

"So, as you can see from figure three in the Prospectus," droned Phil, "our net gross income would double relative to the amortization of the total debt load!"

"Which figure was this?" asked Holly Elf.

"I think it's the one that looks like a pie," said Eugene Elf.

"I like pie! Can we all have some?" asked Gizmo.

"Will you please pay attention?" demanded Dolores Flemspackle. Then she turned to the Yeti standing next to her. "And will you please stop sniffing me!"

"You smell good!" said the giant creature, snuffling her again. "I like you cuz you smell good and your fur is smooth and shiny!"

"That's not my fur! That's my coat. And it's expensive, so get your grubby Yeti paws off it!"

"Ho, ho ho!" said Santa. "I think you may have a special friend, Mrs. Flemspackle."

"I don't need any more friends! And certainly not one who looks like he should be vaccuumed regularly!" Dolores stepped away from the Abominable Snowman, who simply stood closer to her and sniffed her again, this time so hard that her hat popped off her head and landed on his nose!

"Aaaah! My turban! Give it back!" shrieked Dolores.

"Nice to see it happen to someone else for a change," said Bernard Elf, as the rest of the Elves laughed merrily.

"All in all, Mrs. Flemspackle, there are worse things to have happen than having a Yeti take a liking to you," said Santa.

"I can't imagine what they would be," huffed Dolores.

"Well, having a Yeti take a disliking to you would be one." Santa got out of his chair, and walked over to Phil. "I think we've heard enough son. I know you mean well, but Elf technology doesn't work in non-magical places, and you can't move your company to the North Pole. I'm afraid you'll have to find your 'green' technology somewhere else."

Just then, Ali Elf came running into the room. "Santa! You're needed down at the stables!" she cried. "There's a problem with a reindeer!"

What's happening at the stables? Will the Flemspackles give up that easily? Keep reading The North Pole TImes to find out! 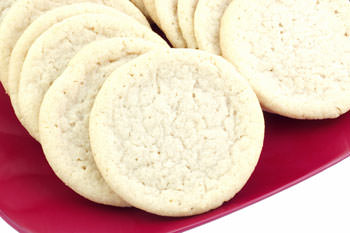 Sugar Cookies
Toss a plate of these on the table and watch them disappear right before your very eyes.