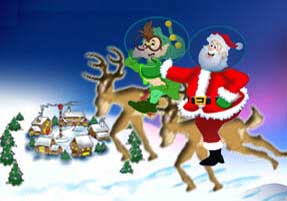 It was a scene of comfort and joy today at the North Pole as Santa Claus and Waldo Elf returned to Earth after spending 23 days in orbit! The two were trapped in a spaceship with no way to land since November 30, when Waldo Elf pushed the 'up' button on the rocket, blasting it off into space! "I thought it was the button that made the bread come out of the toaster," said Waldo.

The elves at the North Pole, led by Mrs. Claus and Gizmo Elf--Santa's Chief Inventor Elf and the designer of the spaceship--worked hard to build a rescue rocket to go and get the two from orbit. They even changed the Appendapulator from a toy-making machine to a rocket-making machine to get him back in time. "It was just like building a squirt gun, except really, really large, and with jet fuel instead of water," said Gizmo.

Mrs. Claus had the elves working extra hard to make the toys, since the Appendapulator was out of service. But the elves went on strike because Mrs. Claus switched their snacks from sweets to vegetables to give them extra energy. "Let's not even talk about what all that candy was doing to their teeth!" said Jiller Elf.

The elves went on strike, and Mrs. Claus brought in some Yeti--or abominable snowmen--to make the toys. But the big, clumsy snowmen were not very good at it. "All they seemed to be able to do was turn one toy into two half toys!" moaned Mrs. Claus.

Mrs. Claus and the elves made an agreement--they could have their sweets after they had some veggies--and the elves returned to work! "Don't tell anyone, but I actually think I like carrots better than carrot cake!" said one elf who was too embarrassed to mention her name. 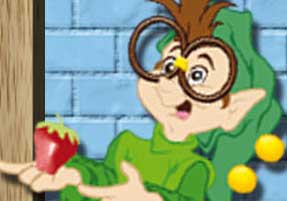 Everything seemed to be working fine, but then the Yeti took apart the rescue rocket, and wrapped it in Christmas paper! "I made the mistake of telling them it was for Santa, and they thought it was a present!" said an embarrassed Gizmo.

It looked like Christmas was going to be canceled, but a terrific idea was thought up by a very unusual person! "It was Waldo Elf's idea," said Santa. "He wanted to know why we didn't just have a couple of reindeer fly up and get us, and bring us back down! What's the sense in having magical flying reindeer if we don't use them every now and again!"

"I just wanted to get back home. I was running out of mustard!" said Waldo.

So now, Santa and Waldo are back, with lots of cheering and hugging and kissing (at least, there was between Santa and Mrs. Claus). "We only have a few hours before I have to leave on my magical ride!" said Santa, "and believe me, I'm not going to fly again unless it's with my reindeer!"

Will they be able to get everything done in time? Keep reading The North Pole Times to find out! 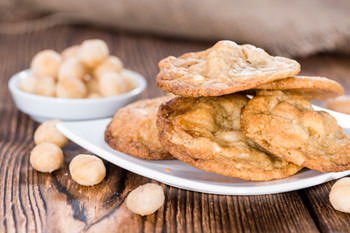